Still there? Maybe you're wondering what I've been doing in the interim. Especially since my posts up until December were less than informative. The short answer is: Stuff. 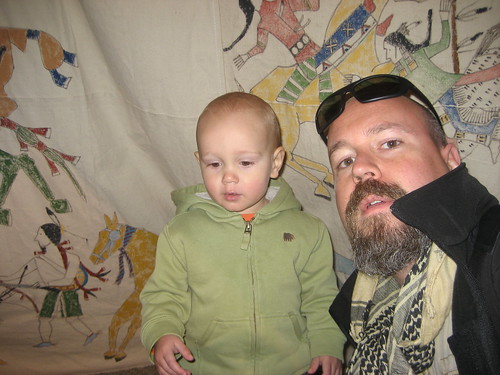 I infrequently write about food and guns on Delicate Art of the Griddle. Learn how to make the awe inspiring Shooter's Sandwich, or the surprisingly palatable Creamed Brussels Sprouts.

Over at Pioneer Ops Group, I write about guns, knives, bags, and other gear. That gets updated, uhm, less irregularly.

My webcomic, Roninspoon.com, is on something of a hiatus. The artists have other work, that pays money, and is a priority for them. I can understand that. I still update the blog occasionally, like when I wrote about my WonderCon trip nearly a month after it happened.

Over at Hawkins: Adventures in Parenting, I've been keeping tabs on the exciting life of being a parent. If you like adorable pictures of my son, and/or long winded descriptions of things like car seat carriers, then you might like it.

I've got a Facebook account. It's mostly just a mirror of the twitter data, but if we've met and you know my name, you can track me down. It also has embarrassing photos from high school courtesy of friends I haven't seen in 20+ years. So, uh, I guess that's a plus?

YOU CAN'T HANDLE THIS. IT WILL MAKE YOUR FUCKING HEAD EXPLODE IN AWESOME.

I CAN'T STOP YELLING! THAT'S HOW AWESOME IT IS!

This is, like, an entire week's worth of internet WTF in one video. You'll watch this and think "That is so weird." BUT THEN IT GETS MORE WEIRD. Casting like this has NEVER been done before.

My favorite part is how Kathleen Turner didn't even bother to try and sing or lip sync. She's just all "Whatever. Is this thing being catered? Can I get some gin over here? And maybe some pastry creme?"

If you live in the US and are of voting age. Get out and vote, if you haven't already. It would be disingenuous of me to say "I don't care who you vote for, just vote" because that's not true. I do have preferences. Despite that, I'd rather you voted, and had your voice counted as against my own preferences, than for you to not vote at all.

"If you are bored and disgusted by politics and don't bother to vote, you are in effect voting for the entrenched Establishments of the two major parties, who please rest assured are not dumb, and who are keenly aware that it is in their interests to keep you disgusted and bored and cynical and to give you every possible reason to stay at home doing one-hitters and watching MTV on primary day. By all means stay home if you want, but don't bullshit yourself that you're not voting. In reality, there is no such thing as not voting: you either vote by voting, or you vote by staying home and tacitly doubling the value of some Diehard's vote."
— David Foster Wallace

In other Back to the Future news, here's some wild archive footage of Eric Stoltz as Marty McFly.

Maybe you've seen this, maybe you haven't. I'm betting at least one of you is going to love it though. He'll probably squeal a bit too. Maybe hop up and down too.

"So how does a group of billionaire businessmen and corporations get a bunch of broke Middle American white people to lobby for lower taxes for the rich and deregulation of Wall Street? That turns out to be easy. Beneath the surface, the Tea Party is little more than a weird and disorderly mob, a federation of distinct and often competing strains of conservatism that have been unable to coalesce around a leader of their own choosing. Its rallies include not only hardcore libertarians left over from the original Ron Paul "Tea Parties," but gun-rights advocates, fundamentalist Christians, pseudomilitia types like the Oath Keepers (a group of law- enforcement and military professionals who have vowed to disobey "unconstitutional" orders) and mainstream Republicans who have simply lost faith in their party. It's a mistake to cast the Tea Party as anything like a unified, cohesive movement"

Maybe you don't think about Nevada much. I do, because I live here, and because I'm paid by the state. I'm an administrator at UNLV. My thoughts and concerns about Nevada are therefore very personal, and to some degree selfish.

If you're one of those people who don't think about Nevada much, you may not know that we are currently facing a budget crisis of enormous implications. To say that we, as a state and as a community, face devastation is very likely not hyperbole.

Shit is getting real.

Clark County Nevada, where I live, has the fifth largest school district in the nation as of 2005, and it's done nothing but grow since then. Nevada has no income tax and the majority of its revenue comes from two sources; gaming and property tax. Nevada's two biggest industries in the last 30 years has been tourism and construction. Both of those have been dramatically impacted by the recession in a vicious cycle.

Tourists don't come to Las Vegas as much, so casinos cut back construction and services, which reduces jobs. People loose their jobs, and so they leave the state. Gaming is down and the the housing market is gutted so revenue is dramatically decreased. So casinos cut services and reduce rates, which reduces jobs, so people loose their house and leave the state, so property taxes aren't collected, etc.

Here are a few choice quotes from the article that demonstrate the impact of the problem.

Most analysts believe that Nevada is facing a shortfall of about $3.4 billion for the coming two-year budget cycle—meaning it does not have the revenues to fund about 50 percent of its current obligations.

The Silver State is constitutionally required to balance its budget and prohibited from imposing a state income tax; it does not have a stable, across-the-board business tax

In 2007, when Nevada was still flush, it had a $127.2 billion GDP; of that, total state expenditures (general fund spending plus miscellaneous other expenditures) came to $8.2 billion, a mere 6.4 percent of state GDP.

Nevada ranked fiftieth in the country when it came to the percentage of GDP spent by the state. It also ranked dead last for the number of state employees per 1,000 residents.

without new taxes Nevada's decision-makers could eliminate all spending not related to education or health and human services—including all funding for police, prisons, highway patrol and the like—and still be left with a budget deficit.

The Retail Association of Nevada recently estimated that Nevadans have cumulatively lost $25.4 billion in income since 2008, translating into a staggering $9,800 per resident.

NV income is primarily sourced from gaming/tourism and property tax. The recession has crushed both of these. NV unemployment is among highest in nation. Projected budget deficit is about 50%, or $3+ billion. NV has specific constitutional requirements for both a balanced budget and funding for education as well as prohibits income tax. NV has the leanest and smallest state government in the nation. No additional cuts are feasible. In fact, cutting EVERYTHING except education and health and human services, would not balance the budget. Without new revenue streams, the constitutional demands can no longer be satisfied.

For the record, I would vote for a state income tax. That'll never happen though, so I'll most likely have to move to another state before my son gets old enough to attend school.

and that I think we can all agree is pretty cool.

A metro map of modern science.

“As many frustrated Americans who have joined the Tea Party realize, we cannot stand against big government at home while supporting it abroad. We cannot talk about fiscal responsibility while spending trillions on occupying and bullying the rest of the world. We cannot talk about the budget deficit and spiraling domestic spending without looking at the costs of maintaining an American empire of more than 700 military bases in more than 120 foreign countries. We cannot pat ourselves on the back for cutting a few thousand dollars from a nature preserve or an inner-city swimming pool at home while turning a blind eye to a Pentagon budget that nearly equals those of the rest of the world combined.”